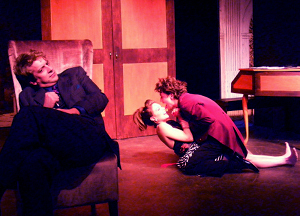 It’s Salieri’s play, but Mozart steals the show in The Production Company’s “Amadeus,” onstage at the Chandler Studio Theatre Center in North Hollywood, an intimate 33-seat venue that guarantees there is no bad seat.

Of course, Peter Shaffer’s Tony Award-winning play that premiered on Broadway in 1980 is a gem. And in the capable hands of The Production Company actors, Director August Viverito and Assistant Director T.L. Kolman, all the wit and psychological intensity shine through. In particular, Patrick Stafford gives a riveting performance as Mozart that surely will not disappoint fans of the 1984 Academy Award-winning film adaptation.

“Music is God’s art,” says court composer Antonio Salieri at the beginning of the play. Salieri believes he has made a pact with God to bring His music to the world. But his dreams are dashed when the young, celebrated Wolfgang Amadeus Mozart arrives in Vienna. Despite his own success and esteemed reputation, Salieri becomes consumed with poisonous envy, recognizing Mozart as the true “voice of God,” and sets out to wage war with God through Mozart by thwarting the young composer’s every attempt to be recognized and even earn a living.

Stafford’s Mozart, with his hair moussed high and wild, entertains as the vulgar, silly youth playing cat and mouse with Constanze and joyfully revising Salieri’s welcome march at the keyboard. Later, he mesmerizes as the tormented and impoverished composer/husband/father descending into madness. In the final scene, he looks absolutely feverish, his face flushed and sweating. Stafford’s command of the range of human emotions is remarkable, and his face is highly expressive and yet naturalistic.

Peter Swander’s Salieri lacks that same emotional depth, hitting some notes with ease but missing the subtleties of the character as jealousy eats away at his soul and his desire for fame eventually turns to a dying wish for infamy. Missing also is the outward expression of the ecstasy Salieri claims to feel at the very sound of Mozart’s notes (recordings are played in snippets throughout the show).

Other stand-outs in the show include Danielle Doyen’s Constanze, who easily turns from giddy to desperate to angry to nurturing. David Robert May’s has great comic timing in his portrayal of the effeminate, bejeweled (and musically clueless) Emperor Joseph II.

Set design is simple and effective for the tiny stage. Costumes capture the characters’ personalities with an upscale, modern flair; in one scene, Mozart sports a gold lame shirt, gold pants and a burgundy jacket.

The Production Company is the recipient of numerous awards, including two LA Drama Critics Circle Awards and a 2009 LA Weekly Theatre Award. It proves its worthiness of commendation with “Amadeus.”