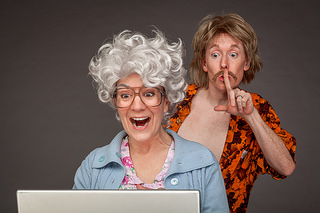 Audiences with YouTube-length attention spans should rush over to the Groundlings Theatre for their latest comedic offerings of improv and sketches: “The Royal Grand Groundlings Hawaiian Resort and Spa.” “Saturday Night Live” could take a few pointers from this hilarious production. The 15 spoofs all ended with definitive endings, instead of just ending. The 100-minute show contains continuous reasons to laugh (or cringe — on purpose) as opposed to SNL’s much lower recent percentage of laughs per minute.

With a revolving cast of actors at any given performance, the cast I caught (Tim Brennan, Jim Cashman, Steve Little, Lisa Schurga, Mitch Silpa, Greg Worswick) worked off each other hysterically — overplaying to the hilt, yet frequently tugging at heartstrings. All of the sketches were written by one of this amazingly talented group of artists.

There are too many side-splitting bits to mention, but “Some FaceTime,” written by Cashman and Michaela Watkins, features Schurga as an elderly grandmother FaceTiming with her grandson, Worswick in voice-over. As the two converse, Cashman can be seen crossing through in the background. The grandson realizes that his grandmother doesn’t know the intruder in a bathrobe exists. After grandma exits the room, the intruder (Cashman) converses with the grandson, explaining that even though he’s been living in grandmother’s house for a period of time now, through various logical explanations, she doesn’t realize he exists. When the grandson threatens to expose him to grandmother, the intruder gives the best reasons to convince him not to. All ends well in a surprise twist. Via the best of comic timings and double takes, these three performers nail this skit!