The Weekend in Review: Opera

The last weekend of February I attended three different opera performances with varying degrees of scope and competency. As an opera impresario myself, let me preface my remarks by saying I believe each performance must be judged within its own context, not with the same plumb line.

On Feb. 27 at 2:30 p.m., I experienced one of the finest Opera Buffs Inc. Spring Performers Showcases to date. The singers were of the customary high caliber, and the theme was “Brush Up Your Shakespeare!,” which provided a delightful blending of art song, opera and show tunes. The program opened with “Orpheus With His Lute” from King Henry VIII by Vaughan Williams, sung by an artist to watch: Nick Zammit, a countertenor whose voice of exceptional beauty will represent the Western Region in the Metropolitan Opera Finals later this spring. Arias and scenes from Gounod’s Roméo et Juliette and Verdi’s Otello and MacBeth were interrupted by excerpts from Cole Porter’s Kiss Me Kate and an art song by Roger Quilter. The most humorous digression was “I Hate Men” sung by sopranos Jacquelynn Fontaine and Alexandra Loutsion, just after the latter’s heartrending performance of “Salce! Salce!” from Otello.The first half closed with “Si Colmi il Calice” from MacBeth, a strong ensemble selection featuring Loutsion and baritone Julian Arsenault.

The second half opened with “Wunderbar,” from Kiss Me Kate, featuring Loutsion and Arsenault. A touching performance of “Be Not Afeared” from Hoiby’s The Tempest, sung by tenor Yujoong Kim, followed. Fontaine and Zammit commenced a melodramatic rendering of “Ill Met by Moonlight” from Britten’s A Midsummer Night’s Dream, only to disrupt it with the observation that the audience was bored and glassy-eyed and wouldn’t we rather hear Zammit sing “Furibondo Spira il Vento” from Handel’s Partenope, which is quickly becoming his signature pyrotechnics aria. Truth be told, the audience was glad the program took this sudden turn. The next set from Hamlet by Ambroise Thomas, a French opera that has not yet come back into fashion, was the only sluggish point in the program. Besides the baritone aria, “O Vin, Dissipe la Tristesse” the soprano aria and ensuing duet, though beautifully sung by Fontaine and Arsenault, were unfamiliar and difficult to follow without translations. “Sing for Your Supper” from The Boys From Syracuse immediately picked up the pace again, and the concert closed with a strong duet from Wagner’s Das Liebesverbot which will be performed in its entirety at USC in April.

Kudos to Music Director and accompanist Mona Lands for wonderful programming. I appreciated Stage Director Michael Van Duzer’s clean, inventive staging. Thayer Hall at the Colburn School was an ideal venue, an appropriate size for a concert accompanied by piano. The Opera Buffs Inc. have supported and encouraged countless emerging artists, many who have gone on to successful careers. For information about upcoming events and news of their artists, visit www.operabuffs.org. 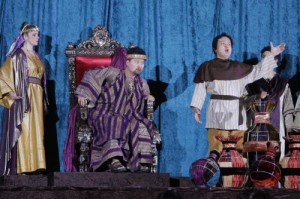 A complete change of atmosphere and scope awaited me at the Cathedral of Our Lady of the Angels for LA Opera‘s 7 p.m. performance of The Festival Play of Daniel: A Medieval Music Drama. The music and text are by anonymous 13th-century authors, and were orchestrated and translated by stage director Eli Villanueva. This pageant combined the talents of the Cathedral Choir, the Colburn’s Children’s Choir and Opera Workshop, Pueri Cantores San Gabriel Valley Children’s Choir, St. John Eudes Children’s Choir, St. John Eudes Adult Choir, members of the LA Opera Orchestra who served as principals in the orchestra, with the ensemble fleshed out by Hamilton High School Academy of Music Symphony Orchestra and the Colburn String Orchestra. Combine these talents under the baton of James Conlon with the fabulous solo artists and Acting and Dancing Ensemble, and you have a recipe for a thrilling performance. Eli Villanueva’s stage direction creatively utilized the various platforms, stairs, and aisles in the Cathedral. Even with such a large cast, I had no trouble following the story and characters. The costume design played an integral part in distinguishing the peasants from the royalty, the soldiers from the advisors.

Hak Soo Kim portrayed the title character with earnest sincerity and an expressive tenor. Yohan Yi gave a strong performance as King Belshazzar with his rich baritone and commanding presence. Tenor Robert MacNeil was regal as King Darius, with a pleasing clarity and ease to his tenor voice. Another soloist of note was Caleb Barnes, a young countertenor, who delivered the Prologue and closing Prophecy from an imposing costume incorporating stilts so he towered over the stage.

Not only do I congratulate LA Opera for reaching out to the community by offering free tickets to The Festival Play of Daniel, I also acknowledge the efforts to incorporate and coordinate several different organizations in this uplifting production. For information about future productions, visit www.laopera.com.

It’s with mixed feelings I approach writing about my final experience of the weekend: Center Stage Opera‘s production of Gounod’s Faust. First, let me say what an important place they have in the opera community in Southern California. There are so few places singers can gain the experience they need to launch an operatic career. Center Stage Opera performs with orchestra, sets, and costumes in the Madrid Theatre in Canoga Park. As this was the first production I’ve seen in their five-year history, I can only address the strengths and weaknesses of the production as I saw it on Feb. 28, not knowing how far they may have come since their inception.

The principal cast was uneven. Adrien Roberts was the perfect voice for Marguerite. I only wish she could have sung with a different tenor. Josh Shaw as Faust was painful to listen to. The tenor has lost all the color of his voice, and in the upper range his vibrato – when he could get it going – is sluggish and a mile wide. Sarah-Nicole Ruddy stood out as Marthe, with natural physicality on stage that immediately draws your eye to her. I would love to see her in more substantial roles in the future. Luvi Avendano, also stood out in the part of Wagner, his stage presence and focused baritone distinguishing his character. I also enjoyed Raeeka Shehabi-Yaghmai in the youthful pants-role of Siebel. Arkeel Tamayo, although he has a pleasing baritone, pushed too much in the upper tessitura for Valentin. Phil Meyer was adequate in his Jeremy Irons persona of Mephistopheles. However, I’ve seen him in other productions and know that the director did not employ Meyer’s acting abilities to full advantage.

And that brings me to the main difficulties I had with the production. According to director Dylan Thomas’ notes, his concept for the show was “The Twilight Zone” television show. Which meant that the entire stage, sets, and costumes were in shades of black, white and gray. Some of the singers wore white makeup, but not all of the choristers did, which was visually distracting. The danger of this color scheme is that the look of the show starts out with all the lifeblood drained out of it. I believe a single, carefully chosen spot of color in each scene would have helped the look. For example, the flower Siebel plucks after dipping in holy water to cancel Mephistopheles’ curse could have been a vibrant red. The flowers presented to the Madonna could have had color, or perhaps a rosary window could have been projected on the back curtain in shades of red and blue. Having chosen “The Twilight Zone” as his theme, Thomas needed to choose a specific decade or year of that show and stick to a specific style for all the costumes. The inconsistent look detracted from the professionalism of the show.

The overall staging of the show needed more life. The production was far too static, with a limited vocabulary of gestures and ensemble configurations. The fight scene and death of Valentin were especially lifeless: the chorus stood around without reacting or responding. I found that the dancers were a distraction rather than an enhancement of the show; each time they came on I wondered why they were there. Their pas de deux during the Walpurgisnacht scene, in an attempt to tell the story of Marguerite and Faust’s affair, her pregnancy and murder of her baby, was frankly in poor taste.

While it is invaluable to give singers the experience of performing with an orchestra, I encourage Music Director and Conductor Brian Onderdonk to contract a stronger violin section. There were several frightening, exposed moments when the strings were not together. I want to encourage Center Stage Opera to keep on keeping on, and to choose one or two production values to improve upon for the Lucia di Lammermoor coming up in May. For more information, visit www.cutlurela.org/madridtheatre.