Theater Review: ‘The Frybread Queen’ at the Autry 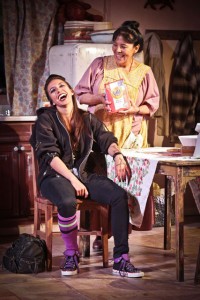 What do you want to see at the theater? A story about traditional values eroding? A family drama? A conflict between generations? Loss? Love? Secrets? Beautiful women? A ghost story?

How about one play that weaves all of those elements together into an engaging and surprising narrative?

Native Voices at the Autry presents the world premiere of “The Frybread Queen” this month, and it tells quite a story. From the relationships between the four women on stage to the elements of the supernatural, each discovery that is made throughout the play is clever and unexpected. Carolyn Dunn has written an interesting story filled with rich, beautiful characters that are performed excellently by the actors. They have the comedic timing to contrast the incredible pain and suffering they all experience throughout the play.

While it is a distinctly Native American story, the themes that it explores are ones that we can all relate to. Losing a loved one is difficult for everyone, and it affects each of the characters differently. We see these four women bare their hearts and souls to each other, learning that none of them really understands the next. Each one has a secret that changes the story dramatically, and Dunn makes sure that we don’t see those changes coming. To make matters more interesting, the element of the supernatural leaves its mark on the production in very effective ways.

Including ghosts and spirits on stage can be a tricky business. The director, Robert Caisley, and his cast do a masterful job of making the audience believe in this ghost, and force us to fear it. The physicality of the actors, especially Shyla Marlin and Elizabeth Frances, is spot-on and terrifying. Pair that with the dynamic acting by Jane Lind and Kimberly Norris Guerrero and you have a cast that pushes each other beyond what is comfortable for the audience to watch. The audience must witness them tear each other’s beliefs and values apart, which is both difficult and engaging.

A good play toys with one’s emotions, and “The Frybread Queen” definitely accomplishes this. Audience members will laugh only moments after squirming in their seats. The characters are endearing, troubled and unique. Watching these four women is a joy.

“The Frybread Queen” runs at the Wells Fargo Theater at the Autry National Center through March 27. Native Voices at the Autry has been developing the play with the playwright, Carolyn Dunn, for three-and-a-half years. It had a developmental production with the Montana Rep. and the University of Montana School of Theatre and Dance in September 2010. Native Voices at the Autry has multiple events planned in conjunction with the play, including talkbacks and a special frybread menu at the Autry’s Golden Spur Café during the day. For tickets or more information, (323) 667-2000, ext. 354, or www.NativeVoicesattheAutry.org.