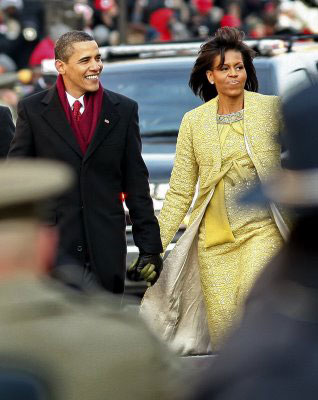 LA photographer Karl Larsen contacted me last weekend with a story idea: “I know this lady in Pasadena who is African-American and she is the City Attorney for Pasadena. Her name is Michelle Bagneris, and her grandmother just turned 109 years old last week!! As a gift I am going to give her a print of Barack and Michelle Obama on the parade route. She was too old and frail to go to the inauguration herself, so I feel this may be the next best thing.”

Not only did I want to know more about how the centenarian Lucile Burrell and her family felt about the inauguration of the 44th President of the United States, but I also wanted to learn the story behind the photo itself and more about the photographer whom I had hired to shoot Brian Wilson and Paul McCartney for stories I worked on as an arts editor at a weekly newspaper.

The Big Picture
Attached in Larsen’s email was his photo of the President and First Lady, smiling, holding hands and waving to an expectant nation on Jan. 20. For so many people, of so many races and backgrounds, that day was historic. Larsen said being at the parade was a “spiritual experience,” a sentiment that many in this country who went into the voting booths on Nov. 4 and only watched the inauguration on TV completely understand.

But Burrell, having been born in Arkansas on Feb. 2, 1900, was someone who perhaps had a much deeper understanding of the significance of the occasion. “She was born just one generation removed from slavery,” Larsen said, “and I thought I would have to give her a photo of this monumental event that I was fortunate enough to capture.”

I drove with Larsen on Presidents Day to Inglewood, where Big Mama, as she is affectionately called by her family and friends, lives with her daughter Rohelia Beal and son-in-law Meredith Beal, Bagneris’ parents. 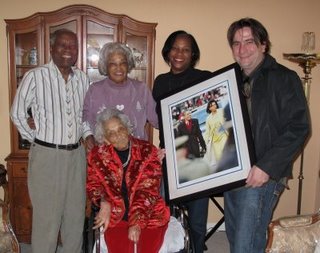 Big Mama – who had met George Washington Carver as a child when he came to Arkansas to teach food-canning skills and stayed at her family’s home – didn’t say much during our visit, but when she saw the 16-by-20-inch framed print of the Obamas, she seemed excited and said “hallelujah.” She even began to sing a little bit.

She had a similar reaction when the family watched the inauguration together on TV. Bagneris told me, “We experienced chills and watery eyes, and Big Mama exclaimed ‘hallelujah,’ and as Obama spoke, she shouted to him to ‘tell the world!’”

All three generations were overcome with emotion, Bagneris recalled. “My 86-year-old father choked up, saying that, having been raised as a child in East Texas, he never in his wildest dreams imagined that he would live to see the day that a Black man would be president.” 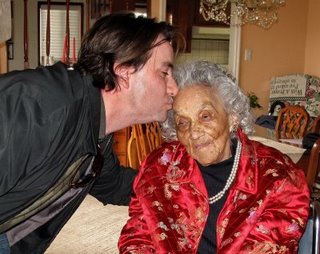 Before we left, Larsen posed with the entire family and gave Big Mama a kiss on the forehead, both of which I captured with his camera.

Afterward, Bagneris told me what the inauguration and Larsen’s gift meant to her. “My mother and I revel in the recognition that, although America continues to experience challenges in race relations, this represents a giant leap forward and something that my children will recognize came with great sacrifice, presenting a hopeful future. Karl’s photo of the First Couple represents the strength, unity and determination that I have seen in my parents and grandparents, and that I hope to convey with my husband.”

Behind the Camera
Larsen didn’t have media credentials to attend Barack Obama’s inauguration, but that didn’t stop him from flying to Washington, D.C., last month. On Jan. 19, he scoped out the mall and realized without a ticket he couldn’t get close enough to the stage, so he visited the parade route, found a good spot and noted things like the lighting at the time of day he expected to take the photo.

The next day he awoke at 3 a.m. and was the first civilian in line for the parade at 4:35 a.m., behind police, volunteers and media. By 7 a.m., he was in place and trying to stay warm – in thermals, ski pants and goggles – waiting for the president to pass by at 4 p.m. Apparently, it’s not just the National Geographic photographers stalking wildlife and ideal skies who have incredible patience.

Over the course of nine hours of talking and even dancing to Motown, country and more over the PA system, Larsen got to know the people around him. “We all were strangers at 7 a.m. and by 4 p.m. were lifetime friends,” he said, explaining that he also promised to send them all a copy of the photo if they were careful not to bump him during that one crucial moment – which came at 4:05 p.m.

He had maybe a matter of seconds to take a photo of the Obamas, who hopped back into the limo right after he snapped it.

I knew that Larsen, who started as the house photographer for the West Hollywood House of Blues and has worked extensively for Rolling Stone magazine – and whose image of Paris Hilton crying in the back of a police cruiser made newspapers across the country – was good at his job. Hearing about his trip to D.C. and seeing his “catch” confirmed that.

Even so, Larsen’s agency has not yet sold the photo to any media outlets (most likely because many have subscriptions to agencies like the Associated Press and Reuters). So Larsen gave one photo as a gift to Burrell and a 24-by-30-inch giclee print to a friend’s mother who happens to be a Congresswoman in Florida. She had flown with the President on Air Force One when he visited her district and wanted to send it to the White House as a thank you.

In the meantime, a giclee print of the Obamas, arguably the biggest celebrities in the world right now, is at the Celebrity Vault gallery in Beverly Hills along with a few other images by Larsen, as well as ones by famous photographers Richard Miller, Bert Stern, and Gered Mankowitz, who photographed icons such as James Dean, Marilyn Monroe, and Jimi Hendrix, respectively. Larsen is investigating the possibility of Obama signing a number of his limited-edition giclee prints so that he can sell them at the hip gallery on Canon Drive and donate a portion to charity.

At the gallery, in addition to photos of Slash whom Larsen had intimate access to as the official photographer on Velvet Revolver’s first album tour, are some others by Larsen. They aren’t portraits, but emotional images that quietly tell LA stories. The shuttered Tower Records on Sunset is a symbol of the end of a musical era. The inflatable pig that escaped during a Roger Waters concert at the Hollywood Bowl in 2006 and floated toward a full moon makes it obvious that being a photographer is as much about being in the right place at the right time as it is about doing your homework. 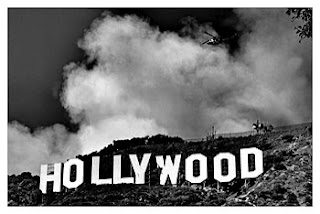