This weekend offers two very different and uniquely entertaining theater experiences. One is at Disney Hall and the other at the Bang Comedy Theater. 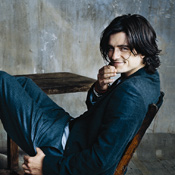 Friday at 8 p.m. and Saturday and Sunday at 2 p.m., Gustavo Dudamel conducts the Los Angeles Philharmonic in performances of Tchaikovsky’s dramatic tone poems on Shakespeare plays: “Hamlet,” “The Tempest,” and “Romeo and Juliet” — the latter being perhaps one of the most instantly recognizable and romantic pieces of music. What makes the program so unusual is that each of the pieces is introduced by scenes from the plays enacted by Orlando Bloom, Malcolm McDowell, Anika Noni Rose, and Matthew Rhys (directed by Kate Burton). These extraordinary actors, performing some of the most well-known monologues and scenes in literature, set the stage for and intensify the emotional effect of the music. The effect is superb.

On a completely different note, “Streep Tease: An Evening of Meryl Streep Monologues” returns to the Bang Comedy Theater on Fairfax Avenue on Saturday at 8 p.m. The brainchild of Roy Cruz, a Filipino stand-up comedian, the show features an all-male cast performing monologues and scenes from films like “The Devil Wears Prada” and “Out of Africa.” The show debuted in September 2009 and has been revamped for this reopening. Read my article about it at the LA Stage Times: http://www.lastagetimes.com/2011/03/streep-tease-returns-to-the-bang-comedy-theater/.