Twyla Tharp’s ‘Come Fly Away’ at the Pantages Theatre 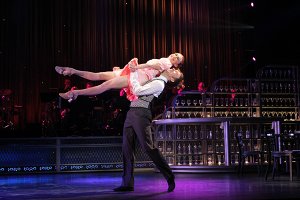 Mallauri Esquibel and Ron Todorowski in “Come Fly Away” at the Pantages Theatre through Nov. 6 / photo by Joan Marcus

Los Angeles, we have liftoff. The dancers in Twyla Tharp’s “Come Fly Away” spend more time in the air, at different levels, in varying positions, than on any part of the stage at the Pantages Theatre. Before I saw this production, which first hit Atlanta in 2009, Broadway in 2010 and most recently Las Vegas as Sinatra Dance With Me, I was told that Tharp’s choreography is ultra-physical. Powered by this tenet, “Come Fly Away” is 80 minutes – with no intermission – of nonstop running, jumping, kicking high and flying higher. The uber-sexy jazz movements are laced with gymnastic feats, Cirque du Soleil tricks and balletic treats. Half the time, it’s hard to believe the performer can go as strong and long as he/she does. But from one Frank Sinatra song to the next, the dancers outdo each other as one is raised artfully in the air, the next splits her legs past credulity and yet another arches her back to the ground with the ease of a Slinky.

The 14 bodies on stage are statuesque, and when male meets female, the partnering is exquisite. During “That’s Life,” Martin Harvey as Hank and Marceea Moreno as Kate push the bounds of what’s humanly possible. It’s the climax of several dance scenes (11, to be exact), and by this point, the audience is panting with exhaustion and holding their inner thighs, imaging what might tear in the next kick, split or leap that flies toward the sky. The performers deserve credit for taking the risks, enduring the pain and putting their bodies on the line every night. Tharp merits recognition for believing that dancers and their bodies can achieve such magnificent dynamism, and demanding as much.

Every time Moreno sets foot on stage the audience can expect what’s never been done before. She appears as thin as a rail, but after her first appearance in “Luck Be a Lady,” it’s obvious she’s made of steel. It’s the only way she could survive the takeoffs and landings, and all the different ways she is thrown around by each male cast member. The fellas have a field day with Moreno, and they’re not much easier on the other women. It’s “Survivor” for dancers.

Cody Green as Sid also stands out with his handsome looks and overpowering charisma. He’s part Channing Tatum in “Step Up” as he breakdances during one section, and a sliver of Mikhail Baryshnikov with his sly masculinity and sweeping agility. Though the dancers rotate in and out of character nightly, I would hazard a guess that they would all thrill.

Without the rich and dreamy vocals, the dancing could be mistaken for a Cirque du Soleil segment or gymnastics tournament. But add the soundtrack of classic Sinatra tunes, and the party atmosphere ignites. The performers have a raging good time. It could be the setting of a swinging ball or holiday party you’ve been to, except the dancers are all extra amazing, and you wouldn’t dare get off the wall. That’s how casually one scene flows into the next, continuing a fluid story of four couples and their fiery goings-on in the club. The terribly sexy vibe carries throughout the night. It’s ecstasy watching the dancers fight, make up, break up and even steal a smooch. Every ounce of “Come Fly Away” is titillating.

The big band sound adds to the epic party feeling, as if each kick is punctuated with a horn blow and every lift with a piano pound. The band sits right on stage, cranking out in-your-face arrangements by greats like Nelson Riddle, Quincy Jones and Johnny Mandel, under the direction of Dave Pierce. The iconic ’40s music and hyperbolic movements are as fine a match as Fred and Ginger.

One gets the sense that anything is possible in “Come Fly Away.” It’s as if when she was choreographing, Tharp took the title of Sinatra’s anthem “Fly Me to the Moon” to heart.

“Come Fly Away” runs through Nov. 6 at the Pantages Theatre.