‘uCarmen’ from Isango Ensemble at the Broad Stage 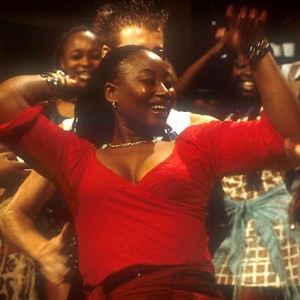 What, you may be wondering, is uCarmen? As you might guess, it is a version of Bizet’s popular opera Carmen, but what’s with the prefix? If it was eCarmen, we might suspect an Internet-based version of the opera; or if iCarmen, it would suggest a sleek, new redesign of the opera by Apple. But uCarmen? Turns out it is a Zulu prefix that alludes to the repositioning of this saucy tale from 19th-century Seville to the present-day troubled townships of South Africa. The reimagining extends to the sets, costumes and especially the music of the original. While decidedly different, this Carmen is bound to please u.

South Africa’s Isango Ensemble is a Cape Town-based group that has been performing in venues worldwide since 2000. They specialize in transforming classic works like The Magic Flute, La Boheme and even A Christmas Carol into pieces that act as social commentary on their experiences growing up in black South Africa. Besides their theatrical work, they have also produced films; their celluloid version of U-Carmen took the top prize at the 2005 Berlin film festival. For earlier versions of uCarmen, Isango used an orchestra that retained the traditional orchestral sound of Bizet’s score. But for the current version, they have jettisoned that, opting for a phalanx of marimbas supplemented by some percussion.

There are some strengths and drawbacks to this approach. As the first strains of the overture erupt, it is impressive to hear nearly a dozen marimbas sound off, conducted by Music Director Mandisi Dyantyis. But as the music progresses, you begin to weary of the one-dimensionality of the sound. In the score, anything longer than a quarter note is expressed by staccato 16th or 32nd note strokes. Fortunately, once the voices come in and the marimba players shrink to two or three, you begin to understand that many of the jobs of the orchestra are being carried by the ensemble. And this is where it gets innovative and interesting: foot stomps become percussion, huffing male voices become double bass and cello, ululating female voices become flute and clarinet.

The ensemble contains members both seasoned and emerging. There is a mentor mentality in which the younger members learn from the elders. This, of course, means there are widely varying levels of vocal expertise. But the principals are uniformly good and a treat to listen to. Standouts are Micaela, played by Busisiwe Ngejane, who seems to have the most classically trained voice of all. Don Jose, played by Mhlekazi Mosiea, impresses with his expressive tenor, and Ayanda Tikolo’s Escamillo has a deep powerful basso that was just right for the role of the macho toreador.

And then there is Carmen herself. Pauline Malefane, one of the founders of the Isango Ensemble, forges a convincing portrait of a sultry vamp who exudes confidence in her ability to manipulate men, but who also cannot hide her vulnerability. Her mezzo range voice was right for the role, and while she proved that she could shake the rafters when needed, she sometimes sang a bit too softly, making it sometimes sound like she is a lesser singer than she really is.

One area that could use a boost is the visuals. There are no set changes, and the only things to look at are sheets of corroded corrugated sheet metal held up with scaffolding along the back, obviously meant to express the ramshackle structures of the townships. The costumes are largely street clothes, blue jeans and red jackets for the women and all-black outfits with berets for the men. While there were some costume changes in later scenes, don’t expect to see any colorful African prints that you might imagine for such a production.

Mark Dornford-May, who adapted and directs uCarmen, chose to present the libretto in English, without supertitles. I think this was a mistake. As familiar as Carmen may be to regular opera-goers, there is bound to be a significant portion of the audience that does not know the story and when it is difficult to make out the words, the story gets muddled. In the film U-Carmen, the libretto was sung in Zulu and was all the more powerful for it. In a production that is taking us into the soul of South Africa, to forgo the cadences and rhythms of the native tongue is a gaping missed opportunity.

Nevertheless, the fabulous songs of Bizet are still here, they are sung beautifully, and it is amazing to watch performers move from playing instruments to singing arias and back again. Let’s see some of the members of the LA Opera orchestra try that. UCarmen succeeds in taking us to a new place with a fresh vision, and the result is captivating and energizing.