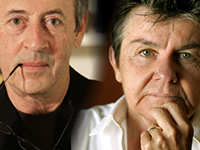 Entertaining and funny poets? Yes, and it should have been no surprise given that Collins penned a poem called “Taking Off Emily Dickinson’s Clothes” and was the inaugural recipient of the Poetry Foundation’s Mark Twain Award for Humor in Poetry, and Ryan has a collection of poems inspired by stories from the newspaper cartoon “Ripley’s Believe It or Not!” (originally titled “Believe It or Not” and re-issued as “The Jam Jar Lifeboat & Other Novelties Exposed”).

Plus, the two are friends who have done events together before, so they had great repartee, exchanging playful barbs and improvising witty remarks as they discussed their life’s work. For instance, Collins had this clever concern: How come everybody asks poets if they’ve ever considered writing a novel, but nobody ever asks a pianist, Why not try the trumpet?

Just days before this event, Ryan had been honored with the 2011 Pulitzer Prize for “The Best of It: New and Selected Poems.” She said it has really helped her self esteem, joking that even if her hair looks terrible, she thinks, What are they going to do, take away my Pulitzer Prize?

Collins said he felt the same way about being named U.S. Poet Laureate. Whenever anything went wrong, his car had a flat tire or sundry other problems, he’d say, How bad can it be? At least I’m Poet Laureate.

Collins has been compared to Robert Frost in the way he combines critical acclaim with popular appeal. Ryan’s poems have been likened to those of Emily Dickinson in that they are compact little gems. Collins described Ryan’s poems as “little acoustic systems” that played with sounds, and Ryan confirmed that sound as well as idea and metaphor all work together in her poems “like chemistry, establishing bonds.”

Word play or “words enjoying themselves,” as Collins called it, is what poetry is all about, both agreed, adding that they wouldn’t write if it wasn’t. “It’s fun to write poems. It’s game on,” Collins said after reading a hilarious and sarcastic poem in which a parent talks to a 17-year-old who is nowhere near as productive as certain composers and other famous figures who made history in their teens.

Ryan extolled word play, nonsense and rhyme. The mere act of saying two words that rhyme in itself can be a satisfaction, she said. After she read “Pentimenti,” a poem inspired by a visit to the Frick Collection in New York, she named — for the first time and much to the pleasure of the Royce Hall audience — a certain type of rhyme she uses: wedge rhyme, to describe the relationship between “exiled” and “extra child” used in close proximity in the poem.

Neither poet is very autobiographical. Collins uses a persona who talks in the present and is a modern version of the “Romantic walker” who would roam the English countryside and fall into a reverie.  His poems often take the reader on a journey and end in delightful or surprising ways. He calls writing “an act of discovery,” not an act of literature. Ryan feels the same; she said as a writer you “always have to invite accident.” When she sits down to write, words and memories become available to her that she never would have imagined.

Both also agreed that what we might call writer’s block is a kind of necessity. You can’t write all the time, Collins said.  For inspiration, he will go to an art museum, or open an art book or encyclopedia. Ryan likes to start with an idea or a title and see where it takes her. Essays also inspire her.

And if you’re thinking you’d like to be a poet, get going, because if you’re like the best of them, most of your poems will fail. Collins said we all have at least 300 poems we have to “write out of our systems. That’s what MFA programs are for,” he joked.