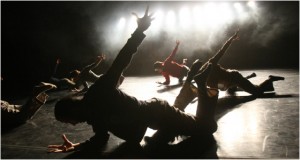 Hofesh Shechter Company will be making its West Coast debut this weekend at UCLA Live, performing the eponymous choreographer’s “Uprising” and “In your rooms.”  Brush up on your recent history: The 2006 youth riots in Paris are the noted source for the former. Better yet, brush up on your dance history: Shechter is the artistic grandchild of Martha Graham.

In 1964, after becoming one of history’s most groundbreaking dancemakers, Graham co-founded a company in Tel Aviv, Israel. Batsheva Dance Company has since created world-renowned methods and works of contemporary modern dance. After a performance career with Batsheva, Shechter began choreographing in 2004 – to immediate recognition and acclaim.  He formed his United Kingdom ensemble of dancers and musicians in 2008.

Putting aside the praise for this weekend’s works (including a Critics’ Circle Award in the UK for “In your rooms”), and ignoring Shechter’s own prowess in dance and music (he began conservatory as a musician, trained as a dancer instead, then returned to percussion after leaving Batsheva), and even disregarding the collective résumé of his dancers (Complexions Contemporary Ballet, Juilliard, high praises from around the UK), there remains an irresistible context for this company.

Graham’s techniques swept dance out from under the ballet, and her narratives and politics helped create a cerebral experience for post-Vaudeville audiences. Batsheva’s current artistic director, Ohad Naharin, makes dances from the deepest of natural sensibilities. No matter the dances, their maker, or their performers, this event should be that rare, precious thing: an indicator of where art can go when it can see the path behind it.

Hofesh Shechter Company will be performing “Uprising” and “In your rooms” at UCLA’s Royce Hall.  Performances begin at 8 p.m. on Friday, Oct. 16, and Saturday, Oct. 17. Tickets are $24-$48; for more information, or to order tickets, visit www.uclalive.org.