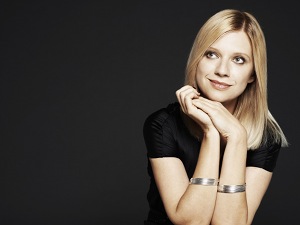 In the fog of a mid-life crisis, Ukrainian-born pianist Valentina Lisitsa almost gave up music. Now, she is among today’s most popular classical musicians with a global concert career and a Decca recording contract. Lisitsa will make her American Youth Symphony (AYS) debut performing Rachmaninoff’s scintillating Rhapsody on a Theme by Paganini at the orchestra’s Springtime in Paris Gala, which includes a free concert on Sunday, March 9, at 6 p.m. at UCLA’s Royce Hall, followed at 8 p.m. by an optional fundraising soirée and bistro dinner to benefit AYS.

Lisitsa jumpstarted her stalled career with YouTube. Since 2007, she has posted hundreds of videos of herself playing piano, everything from practicing at her home in North Carolina during Hurricane Irene to recording at Abbey Road Studios. With more than 62 million views and 105,000 subscribers to her YouTube channel, Lisitsa has become nothing short of a sensation. In yet another fascinating proactive move in 2010, she and her husband spent their life savings to hire the London Symphony Orchestra to record the four Rachmaninoff concertos.

The orchestra is comprised of 106 students and graduates from 28 high schools and universities in Southern California. AYS has trained more than 2,300 musicians since it was founded, and many of its alumni hold principal positions with the world’s top orchestras, including the Chicago Symphony, Los Angeles Philharmonic, New York Philharmonic and San Francisco Symphony.

Reservations are recommended but not required for the American Youth Symphony’s free concert at Royce Hall, but tickets for the post-concert fundraising gala, which begin at $500 per person, must be reserved in advance. Royce Hall is located on the campus of UCLA at 10745 Dickson Plaza in Westwood 90095. For more information, please call (310) 470-2332 or visit www.AYSymphony.org.