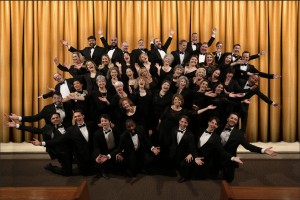 If you love opera and don’t know the Verdi Chorus, perhaps it’s time you did. Their 35th anniversary season culminates with Passione! Opera! for two performances only at the First United Methodist Church in Santa Monica on Saturday, Nov. 10, at 7:30 p.m. and Sunday, Nov. 11, at 2 p.m.

The Verdi Chorus is the only choral group in Southern California (and quite possibly the country) that focuses primarily on the dramatic and diverse music of the opera chorus. Every Monday night, more than 50 singers from every walk of life and ranging in age from 18 to 80 come together as the Verdi Chorus. This wide swath of people includes to-be opera stars at the beginning of their careers, college students who have just begun to realize their operatic gifts and talented opera aficionados. Its repertoire includes over 300 choruses from 81 operas in seven languages.

Among those who got their start with the Verdi Chorus is bass baritone Ryan McKinny, who was hailed this past July in The New York Times for his performance in Peter Sellar’s Dr. Atomic.

Founding Artistic Director Anne Marie Ketchum says, “When going to an opera, what many people take away are the main arias and duets sung by the stars of the production. With the Verdi Chorus, we focus on something else — as there is such a wealth of incredibly  glorious music for the chorus in opera. In fact, some of the greatest moments in opera are the big ensembles — when all of the soloists come together with the chorus, and these are things I love to program.”

For this 35th anniversary concert Ketchum chose a few of these iconic pieces, including:

In addition, at the Nov. 10 performance, Los Angeles County Field Deputy Zachary Gaidzik will award the Verdi Chorus a document of commendation on the occasion of their 35th anniversary for outstanding contributions to the Third District of Los Angeles County, represented by Sheila Kuehl. The Verdi Chorus was also recognized this fall by the City Council of Santa Monica for its achievements over the last 35 years.