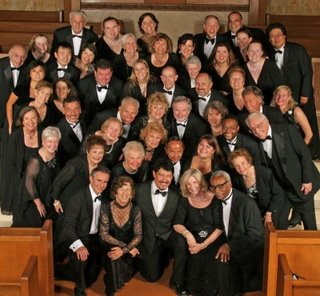 The Verdi Chorus performs Nov. 21 and 22 in Santa Monica.

Opera fans and those curious about the art form will find the Verdi Chorus Fall Concert a pleasing mixture of opera standards, less familiar treasures, and operetta. Performances are Saturday, Nov. 21, at 7:30 p.m. and Sunday, Nov. 22, at 4 p.m. at the First United Methodist Church in Santa Monica.

The Verdi Chorus is unique in the LA area, programming only music for the opera chorus. The group boasts more than 50 voices, from all walks of life, sharing a common bond of loving opera and singing it well.

Founder and Music Director Anne Marie Ketchum enhances her concerts by programming opera selections that feature solo artists as well as opera chorus. For the Fall Concert, soprano Ani Maldjian will sing the part of Musetta in the Chorus’ selection from Act Two of Puccini’s “La Boheme.” Those who frequent Long Beach Opera or the Metropolitan Opera auditions will be well-acquainted with Maldjian’s artistry.

We are all familiar with Bizet’s “Carmen.” Excerpts from another of Bizet’s masterworks, “The Pearl Fishers,” including the stunning duet, are among the unfamiliar gems on the program. Bradley Wisk, tenor, and Museop Kim, baritone, will be featured in the duet. Wisk has recently received awards from the Performing Arts Scholarship Foundation in Santa Barbara and the Opera Buffs in Los Angeles. Kim has appeared at Wolf Trap Opera, Glimmerglass Opera, Juilliard Opera Center and Aspen Music Festival and has performed the roles of Escamillo in “Carmen,” Guglielmo in “Cosi fan Tutte,” the title role in “Don Giovanni,” and Marcello in “La Boheme,” to name a few.

What Verdi Chorus concert would be complete without selections by its namesake? For this program, Ketchum has chosen choruses from “Giovanna d’Arco” (“Joan of Arc”), an early Verdi opera which is seldom performed. “But it is chock full of gorgeous music,” says Ketchum. “We’ll definitely revisit ‘Giovanna d’Arco’ at future performances.”

New contributing writer Wendy Kikkert is founding president of The Intimate Opera Company. She has earned degrees in piano performance from Wellesley College and a master’s degree in vocal performance from CSU Long Beach.