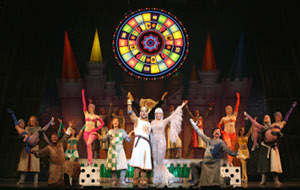 "Spamalot" at the Ahmanson Theatre/photo by Joan Marcus

The huge cartoon foot from “Monty Python’s Flying Circus,” women dressed as cans of Spam, someone carrying a picket sign warning that the play features the use of shrubbery. Yes, it was kind of a circus in front of the Ahmanson Theatre last night for the opening of “Spamalot” in Los Angeles.

Eric Idle (book and lyrics) and John Du Prez, who co-wrote the music with him, sat in the audience – which was peppered with celebrities like environmentalist/actor Ed Begley Jr., hilarious writer and performer Sandra Tsing Loh, and ubiquitous TV actor Steve Valentine – and jumped up on stage after the performers took their final bows.

It has taken a long time for the show to get to LA, after long stints on Broadway and in Las Vegas, and Idle wanted the crowd to know that he and Du Prez worked on “Spamalot” in the Ahmanson and were excited to finally see it performed there. “We live and write in LA. This is an LA play,” Idle said to great applause.

Idle also thanked his fellow Pythons: Terry Gilliam, Terry Jones, the late Graham Chapman, Michael Palin and John Cleese. Then he led the cast and audience in a sing-along of “Always Look on the Bright Side of Life,” a foot-tapping number originally from “Monty Python’s Life of Brian” and also in “Spamalot.”

The touring production of “Spamalot” starring John O’Hurley in the role of King Arthur and Merle Dandridge as the Lady of the Lake at the Ahmanson Theatre delivered nonstop laughs just as advertised. 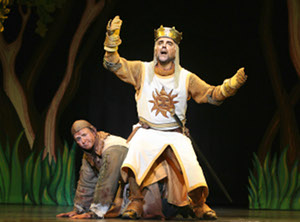 John O'Hurley and Jeff Dumas in "Spamalot"/photo by Joan Marcus

The show self-promotes as “lovingly ripped off” from the 1975 film “Monty Python and the Holy Grail.”  At its core, “Spamalot” is a parody of the Legend of King Arthur, but superimposed over it are jabs at Broadway theater and irreverent social commentary as only Eric Idle could fashion. The original 2005 Broadway production received 14 Tony Award nominations, capturing three of them, including the Tony Award for Best Musical.

“Spamalot” was a long time in coming to Los Angeles, having waited for the Broadway and Las Vegas productions to close. But let’s “Always Look on the Bright Side of Life”; we got King Arthur from the Las Vegas show and the Lady of the Lake from the Broadway production. The combination was magical.

O’Hurley’s dynamic persona and deep voice made for a great role, one which he has been familiar with for years, having starred in the Las Vegas run. O’Hurley’s smooth movements added a subtle elegance to this dull-witted Arthur, a perfect foil for the humor.

Merle Dandridge as the Lady of the Lake sang with a marvelously theatrical voice that was just over the top in a manner perfect for a Monty Python show. Sometimes I found myself wondering how fine she could sing without the burden of her character.  Dandridge came to this “Spamalot” after playing the final Lady of the Lake in the Broadway production.

The cast, some of whom also came from previous productions, were outstanding, with James Beaman as Sir Robin, Ben Davis as Galahad, Jeff Dumas as Patsy, Rick Holmes as Lancelot, and Christopher Gurr as Bedevere. The choreography by Casey Nicholaw was great, though its execution was sometimes lackluster.

… and who played the voice of God?  That would be John Cleese, of course.

Director, Mike Nichols, a veteran of earlier productions, created layer upon layer of comedic puns, sight gags, double entendres, and witty badinage mixed with potty humor and outright absurdity to keep the audience riddled with laughter, even though most knew the jokes.  It was a testament to the quality of the performers that they found a way to deliver such well-known comedic material and to keep it fresh. References to Los Angeles and current national events also helped to punch it up for our local consumption.

The show was everything that it promised. If you are looking for a good laugh, this is the show for you. It is so low-brow that it is high-brow. Catch it during the nine-week run through Sept. 6.  I guarantee you will leave whistling “Always Look on the Bright Side of Life.”