Vincent by Leonard Nimoy at the VS Theatre 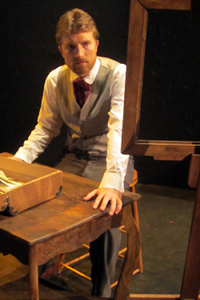 In Van Gogh’s famous painting “Starry Night,” a multitude of stars blaze fervidly in the night sky above St. Remy. In Vincent, currently at the VS Theatre on Pico, only one star blazes, but the light seems just as intense and intriguing, illuminating the mysteries inside the life of the great painter.

Vincent has an interesting pedigree, beginning life as a 1979 play by Phillip Stephens called Van Gogh. Actor Leonard Nimoy, best known as Spock in the Star Trek franchise, found the play at a time he was scouting for his own information on Van Gogh. He bought the rights and then expanded and adapted the work himself. In particular, he made use of the hundreds of letters sent from Vincent to his brother Theo during his period of artistic ascendency. As a result, we hear many of the actual words of Vincent Van Gogh spoken throughout the play, which adds a sense of verisimilitude to the proceedings.

Nimoy himself performed the role over a hundred times, including in a 1981 TV movie of the same name, and his play has continued to be performed with some regularity around the country. In this version, directed by Paul Stein, we have French actor Jean-Michel Richaud performing the solo role. It is his first one-man show, and he does a very good job with a schizophrenic role that requires the embodiment of two people: Vincent and his younger art dealer brother Theo.

The first thing you notice about Richaud as he enters in period costume is his physical resemblance to Vincent; with his trimmed beard and short spiky hair, he gets us halfway there. But this is not Vincent—it is Theo who is speaking to us, the audience, at a memorial for his recently deceased brother. The entire play is, in essence, an apologia for his brother and his eccentricity. However, it is when Theo morphs into Vincent, inhabiting the quite different persona of the painter in flashbacks and remembrances, that we see the best part of the performance. Richaud’s native tongue is also an advantage, as there is a dramatic tirade spat out in staccato French near the beginning of the play.

Richaud quickly finds the humor inherent in the script during the first half of the play, and there are several knowing ironic “winks” to an audience obviously expected to know something of Van Gogh’s reputation. A television screen in the corner emphasizes the text with various works from Van Gogh on a timeline as we move through the seminal events of his life, such as his move to Arles and his self-imposed stay at an asylum.

But it is Richaud’s exploration of the artistic temperament that makes this production worthwhile. Van Gogh was a tortured soul; he suffered from numerous health problems, including epilepsy, and battled mental illness. He was irascible, hard to get along with and, to the great distress of his family, had a penchant for prostitutes and peasant girls. He was also very religious and had planned to become a priest before committing to art. Through the interplay of Vincent and Theo, Richaud brings up all of these facets and nuances for us to consider in evaluating the truth about who Vincent really was.

Carefully assembling and juxtaposing these fragments, Richaud leaves us with an appropriately impressionistic portrait of a man obsessed by the urge to create (Van Gogh frequently painted two canvases per day, every day, racking up over 2,000 paintings in the last decade of his short life — he died from a self-inflicted gunshot wound at age 37). In the end, Theo’s impassioned conclusion is that Vincent was a noble soul who fervently believed in the nobility and transcendence of art, while disdaining the crass commercialism associated with artistic success. That uncompromising attitude describes Richaud’s performance as well and makes Vincent a worthwhile evening at the theater.