‘Waiting for Godot’ in Glendale 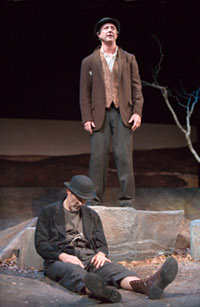 Joel Swetow (Estragon, aka "Gogo") and Robertson Dean (Vladimir, aka "Didi") in "Waiting for Godot" at A Noise Within / photo by Craig Schwartz

Samuel Beckett’s “Waiting for Godot” was an instant success when it debuted at the Théatre de Babylone in Paris in January 1953. It ran for 400 performances and received critical praise from such writers as Tennessee Williams, Jean Anouilh, Thornton Wilder and William Saroyan.  Greeted with jeers and boos from some audience members at its London and American premieres – and many times since – it has, nevertheless, enjoyed countless productions and rabid fans around the world for nearly 60 years. Arguably the most famous example of Theatre of the Absurd, a form of drama in which traditional plot, characters and action are discarded, “Godot” creates a surreal theatrical experience.

As Didi and Gogo remain stuck in a devastated landscape awaiting the arrival of a mysterious man who – spoiler alert – never arrives, “Waiting for Godot’’ takes on unexpected immediacy and poignancy in the wake of the earthquake that devastated Haiti last week. As we watch two men waiting interminably for either rescue or death, who can escape the mental overlay of tragic live-feed videos from Port-au-Prince, seared permanently on our collective visual cortex?

Director Andrew Traister describes his production as “a straightforward reading of the play. It is simply about two men waiting, but there was a definite desire to make these real men, with real problems, in a real relationship.” He also notes that the special challenge of directing an absurdist play is “understanding what the absurdity is and clearly defining it for the audience so they know what they are laughing at. There are no added extraneous bits that confuse the meaning of the play.”

This production contains no startling revelations, possibly because after decades of erudite debate, and thousands of directors fiddling with the “meaning” of the text, there are no revelations to be had. ANW’s stark and unembellished telling allows the audience to respond authentically, unguided by the bludgeon of “inspiration.” What it all may mean remains up to the viewer.  Didi and Gogo cling to the flickering faith that Godot will come. Godot will bring answers. Godot will bring meaning. Godot will bring happiness. But help does not arrive. Not today. And, in the ruins of failed Socialism, robbed of will and volition, “there is nothing to be done.” So that is what they do: nothing.

“Waiting for Godot” may well be the ultimate 20th-century statement on existential futility, penned as it was in the wake of the atom bomb. But it’s also a superbly well-crafted piece, which precisely matches form to content to historic period, while holding the mirror to its audience. As Kenneth Tynan wrote of Beckett’s doomed misfortunates after the infamous London premiere in 1955: “Were we not in the theater, we should, like them, be clowning and quarreling, aimlessly bickering and aimlessly making up — all, as one of them says, ‘to give the impression that we exist.’ ”

LA area residents have through Jan. 24 to experience this extraordinary theatrical event.