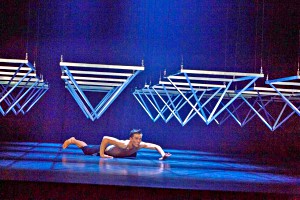 Wayne McGregor brings his “Autobiography” to the Ahmanson. / Photo by Richard Davies

British contemporary dance choreographer Wayne McGregor is bringing his “Autobiography” to the Ahmanson Theatre for two shows this Friday and Saturday, Oct. 5 and 6, at 7:30 p.m. and a single show on Sunday, Oct. 7, at 2 p.m. Launching the 2018/2019 season of Glorya Kaufman Presents Dance at The Music Center, this Los Angeles premiere marks the start of the series’ 16th year of production.

Based on the science of the choreographer’s 23 sets of chromosome pairs, the acclaimed work is shaped partly by chance as well as by an original electronic score. This aural environment is performed live and composed by Jlin, with set design and projections by Ben Cullen Williams and an algorithm created by Nick Rothwell. Composed of self-contained vignettes matching the number of genetic dyads, the choice and sequence with which these scenes are presented are determined by a computer formula before every performance. Thus, each viewing is a unique event, never to be seen again in that same way.

Layering personal memories, old writings and music around the 10 dancing collaborators of Company Wayne McGregor, each of the scenarios reflect what promotional materials label as “questions about the human condition.” At times, these units “challenge audiences to reconsider any preconceived notions of dance and explore how movement can communicate the true essence and distinctiveness of who we are as human beings.”

The Guardian commented in a five-star review, “Wayne McGregor turns his life story into dance in a mesmerizing, inimitable show based upon his own genetic code.”

McGregor has been awarded a CBE, which is a Commander of the Most Excellent Order of the British Empire for his Service to Dance. The recipient of many choreography awards in his country, he has also set his work on a long list of international ballet companies.

Tickets: Tickets are $20-$87 and be purchased at https://www.musiccenter.org/smartseat-reserve/?performanceNumber=4841#/.