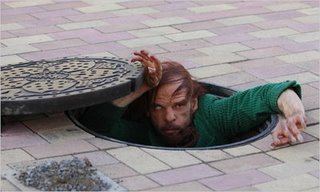 Head over to the Regent Theatre, get a ticket to “TOKYO!,” and let the surreal visions of three filmmakers rain over you. Michel Gondry (“Eternal Sunshine of the Spotless Mind”), Leos Carax (“Lovers on the Bridge”), and Bong Joon-Ho (“The Host”) direct three very different variations on a theme (in Japanese and French with subtitles).

Gondry’s short, “Interior Design” — by far the most elegant — is grounded in the very real struggles of a young couple who have just arrived in Tokyo. Hiroko is there to screen his first film, an esoteric, stylized piece that goes overboard in trying to be original — and emphasizes how the very triptych we’re watching is surreal but still intelligently crafted. While he is excited about his imagined prospects, Akira is upset that she can’t even get a job gift-wrapping packages. One morning, she awakes alone in the friend’s apartment where they have outworn their welcome, and a dreamlike sequence reveals her newfound usefulness in life.

Carax’s “Merde” takes an immediate plunge into the absurd and metaphoric, when a creature (played by Denis Lavant) resembling a devil, terrifying leprechaun, or evil troll emerges from the Tokyo sewers. At first innocently consuming money, cigarettes, and flowers, he sets off a media frenzy, heightened when he disovers grenades left over from World War II in the sewer and wrecks havoc on Tokyo like a human Godzilla. The gibberish exchanged between the creature and his twin-like lawyer in the prison and courtroom can get tiresome, but the symbolic messages of the film win over.

Joon-Ho’s “Shaking Tokyo” returns to the more naturalistic bent of the first short, following a shut-in, or hikikimori, who expereinces an unlikely spark of love at the moment of an earthquake. The hikikimori seems far too mentally healthy for someone who has isolated himself from the world for the past 10 years, and he somewhat easily crosses the threshold when he finds out the pizza delivery girl he fell for has become a hikikimori herself. Despite its flaws, the ages-old story of the lover out to rescue his trapped sweetheart serves as a soothing close to the triptych.