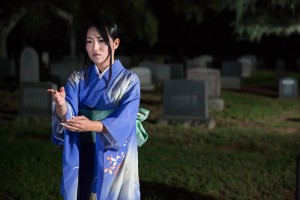 Alpha Takahashi in “The Grove of Rashomon,” one of the plays in Wicked Lit’s new season. / Photo by Daniel Kitayama

Something wicked this way comes… in this case it is Wicked Lit, a spate of short, spooky plays running through Nov. 14 at Altadena’s remarkable Mountain View Mausoleum and Cemetery. This is site-specific theater at its best, using stage smoke, dramatic lighting and ambient sounds to create eerie and unsettling stagings among the gravestones and cenotaphs of the permanent residents of this beautiful, historic, funereal park.

Wicked Lit began seven years ago as strictly a Halloween event, but its popularity led to the creation of a year-round theater company called Unbound Productions. In addition to the Wicked Lit event, the company holds readings and creates installations throughout the Pasadena area. This year’s offerings include three formal plays — The Grove of Rashomon, The Ebony Frame and The Fall of the House of Usher — as well as a sort of meta-play called The System that purports to be instructions for the attendees, but turns out to be a performance with an amusing storyline of its own. The audience is broken up into three groups, to keep crowd sizes manageable, and each group sees all three plays, in a differing order.

The Grove of Rashomon is based on a 1922 Japanese short story by R. Akutagawa, also the basis for Akira Kurosawa’s cinematic masterpiece Rashomon. The group files into the Mountain View Cemetery proper where the action takes place in and around a small mausoleum and a grove of trees among the gravestones. A distraught woman in a kimono is looking for information about her missing daughter and she questions various people she meets, each of whom has a different spin on what happened. Along the way she meets a witch, and spirits of a samurai and a criminal are summoned. They arise from their graves to reenact their stories. With hazy smoke drifting over the gravestones and the strains of a koto and shakuhachi playing in the distance, the vintage Japanese characters take on a mysterious and riveting aura.

The Ebony Frame takes place in the rear gardens and antechambers of the main mausoleum. The 1893 story by English author and political activist Edith Nesbit tells the tale of a young man who has just inherited an old house that contains a portrait of a Spanish noblewoman, a remarkable portrait of unusually lifelike qualities that will drive him to the brink of madness. A comely but strict chambermaid plays a part in the drama and at the same time guides the audience as we witness the dissolution of a once-chipper chappie.

The highlight of the evening is Edgar Allen Poe’s The Fall of the House of Usher. Here each group is taken inside the main part of the Mausoleum, led by a voiceless beckoning guide. This 1920s confection of limestone and marble was designed by Cecil Bryant, who designed more than 80 mausoleums in the early 20th century. With outstanding architectural spaces, Mountain View is considered the crown jewel of Bryant’s designs. It boasts a 180-foot-long Great Gallery, its ceiling covered with Renaissance style frescoes, and its windows clad in stained glass. A grand staircase leads to upper galleries and a large rooftop patio. All of these spaces are used to great effect in the production.

For those who somehow missed the Vincent Price movie of the same name, the story involves a young man invited to the crumbling ancestral mansion of a friend, Roderick Usher, who has been complaining of declining health. Roderick’s twin sister is likewise suffering a precipitous mental and physical decline that seems to be hereditary. She suddenly dies, and is quickly entombed, but she does not stay long in her repose. The house itself seems to turn malevolently upon the remaining living, and the audience is quickly hurried out of the hall just in time to witness the “destruction” of the entire edifice. With subwoofer speakers rumbling, strobe lights flashing and smoke machines spewing, the atmosphere inside the doomed house of the dead is one of the most dramatic and evocative I can remember in my years of theatergoing.

With excellent casting, the acting is mostly at a high level with some standout performances (Kevin Dulude’s dual performance as Satan and Nurse Racher deserves special mention). A brilliant technical staff have succeeded in making each of the locations not just spooky, but haunting. Wicked Lit is an entertainment that goes well beyond delivering cheap Halloween thrills to being an annual theater event that Angelenos should put on their must-see list. Be sure to call for reservations.