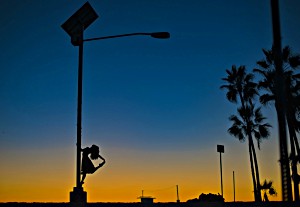 The Los Angeles Dance Festival will be held at Theatre Raymond Kabbaz. / Photo by Drew Forsyth

Los Angeles has long been an incubator for new dance ideas in American culture. Ruth St. Denis pioneered her exotic style of appropriated movement explorations right here in the early 20th century. Isadora Duncan soon followed that by drawing away from ballet and moving softly in bare feet. Both artists began their experiments in Southern California. Decades later, Bella Lewitzky maintained an internationally touring company based in LA. Lula Washington, who started her company in the ’80s, continues to share her perspective on life through dance across the globe.

More recently, our City of Angels has become the home for a number of talented female artists to investigate the concert milieu. The sixth edition of the Los Angeles Dance Festival is highlighting this new generation of female dance makers in “Women Rising.” Produced by the Deborah Brockus Dance Project and Theatre Raymond Kabbaz, the three-performance festival runs from Thursday through Saturday, March 1 to 3. Each of the shows begins at 8 p.m. and includes a selection of works created by eight modern choreographers/companies headed by women. Men are performing, but women are driving the bus.

Scheduled for March because of Women’s History Month, the evenings’ goals are described in promotional materials as being “to celebrate, develop and promote women’s choreography.”

Along with the stage performances, each intermission includes a site-specific offering outdoors and dance-related artwork in the plaza. A Service to the Field Award will be given each night honoring a (female) leader who has changed the landscape of dance in Los Angeles. This year’s recipients are: JoAnne DiVto, Renae Niles and Ann Haskins.

The following three weekends continue the celebration with more performances and dance classes at the Brockus Project Dance studios in The Brewery Arts District.