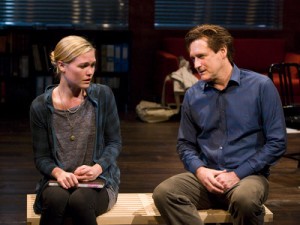 For those who wonder if David Mamet’s “Oleanna,” which premiered during a time of political correctness and gender wars in 1992, can stand the test of time, the revival directed by Doug Hughes at the Mark Taper Forum through July 12 proves the answer is yes. The two-character play stars film actors Bill Pullman and Julia Stiles as a professor and student facing off in word-to-word combat.

In the beginning, there are some laughs and lightness, as John reveals his cynical and unconventional ideas about education, and Carol plays the reserved student who feels flummoxed and alienated by academic rhetoric and elitism.

As John opens up about personal problems and inadequacies planted in childhood, he makes himself vulnerable in order to help his student. Though others may find ambiguity in the play, it seems clear in this production that John is the victim of Carol’s predatory behavior, that the accusations she takes to the tenure committee are premeditated, mean-spirited and patently false. Some in the audience gasped when she upped the ante in the third act with another outrageous claim.

The power shift from John in the opening act to Carol in the second and third is entirely fueled by language, by what these characters choose to say to each other and how they say it. Carol turns from confused lamb to blood-thirsty lion in the second act, and John is suddenly the one saying he doesn’t understand . The tables are turned, as the professor, who makes a living with his fluent command of language, is dominated by the student’s words.

She makes an example of John to further the cause of her “group,” which we assume is some sort of feminist organization, but the battle of the sexes generally seems secondary to the more dramatic idea that words can be weapons wielded for power.

The tension builds throughout the play, and like a kettle of water coming to a boil, it finally erupts in a torrent of steam. John’s violent eruption can’t help but seem like a natural reaction. It’s as if Carol had talked her way into making her previously empty allegations a reality to some extent. Pullman and Stiles make the climax almost unbearable to watch, yet riveting.

I’m not a fan of Mamet’s stilted, constantly interrupted dialogue, which has the tendency to be unnatural and even irritating. But Pullman and Stiles (who reprises the role she played in London in 2004) did an extraordinary job of making Mamet’s writing work. Pullman was especially convincing, as the breaks in his dialogue seemed to rise organically from his character’s frustration and attempts to articulate his thoughts.

Pullman and Stiles demonstrated that “Oleanna,” a taut 75-minute drama, is truly an actor’s play that can only be brought to life with the most intense understanding of social behavior and of the power of words to injure and destroy.