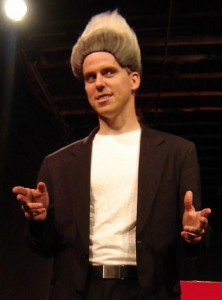 I’ve got a fever. And the only prescription is more… Walken.

Thank goodness “All About Walken: The Impersonators of Christopher Walken” — which has been developing a following for quite some time and recently ran for four performances at Theatre 68 on Sunset Blvd. in Hollywood last November and December — returns for two shows at the LA Improv (annex) on Saturday, March 28, at 8 and 10 p.m.

Created, produced and directed by Patrick O’Sullivan, this show is actually as awesome as it sounds. Nearly a dozen actors take on the Academy Award-winning actor who trained as a dancer in musical theater but has a cult following because of his fascinatingly bizarre movie roles, his turns as host of “Saturday Night Live,” and, of course, his distinctive speech rhythms and pauses.

The “All About Walken” players don’t just run through rote imitations; they have crafted a show that abounds with creativity and plays intelligently with Walken’s famous roles, idiosyncratic speech and quirky personality. O’Sullivan and crew — including Amy Kelly, Dionysio Basco, Kenzo Lee, Lily Holleman, Aryiel Hartman, Joe Dallo, Kate Frisbee, Naathan Phan, Pat McAleenan, Ivet Corvea, and Sascha Rasmussuen — perform songs, improv, skits, and more. Yes, there is a cowbell, and they do the watch scene, among other favorites.

The show kicks off with O’Sullivan (in a wig that is a character on its own) as Walken doing a version of Nancy Sinatra’s hit with a minor adjustment to the lyrics: “These boots were made for ME.”

Amy Kelly — yes, a woman — does a hilarious fake commercial with Walken as spokesperson for a hygiene product. But she is also a dead ringer for Robert DeNiro in a few scenes that play on the “Taxi Driver” movie, so much so that her role as DeNiro practically overshadows her turns as Walken — not that there’s anything wrong with that.

While everyone is amazing, another woman, a wide-eyed blond named Lily Holleman, also deserves special mention for her spot-on impersonation of Walken.

It might be hard to imagine men and women of all shapes, sizes, and ethnicities all becoming Walken, so don’t try. Go to the show instead, and get ready to laugh your boots off.